​In January of 2019, we celebrated the 100th Anniversary of our church building (the east/sanctuary side).  While the congregation is older, having been organized in 1893, there is a common theme running back to the beginning.  Every time the congregation built a building, they quickly grew out of it.  We’ve ended up with a beautiful century-old building, with a large 1955 addition of an education wing, that is bursting at the seams with our preschool program, tenants, community activities and an active and faithful church congregation that is a cornerstone in our neighborhood.  We are proud to be a beacon of hope and a place where people belong in the Washington Park area—and look forward to the next 100 years of ministry in this place!
The following is an excerpt from a sermon given by Reverend Richard Evans in 2008 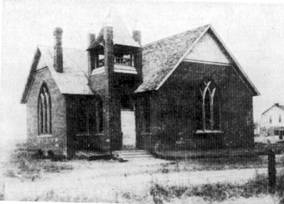 In 1880, Frank Lort crossed the Elk River in Maryland, and headed for Colorado. He set up shop in Manitou. When he heard that Hattie Lort’s health was failing because of asthma, he wrote that people were coming west for a cure. So Hattie and Ellen, who had never traveled, came to Denver. Frank bought a house at 725 S. High St. As Methodists for generations, they began going to church at Trinity and then switched to Grant Avenue Methodist, closer to their home. But they wished for something closer and one for the area children. 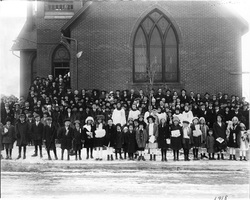 F.A. Bailey, whose father had homesteaded this area, was offering lots in Myrtle Hill for $200-$250 each. The Lort sisters read in 1892 that Rev. John Collins had met with some residents of Myrtle Hill about starting a church in Arapahoe County. They went to see him in his tent in Littleton, and discovering that nothing had come of the meeting, they offered their house as a place for Sunday School for children. So on Sunday, Feb. 5, 1893, 20 children and 15 adults gathered at 725 S. High. That is where we started.

Before long, they decided to build a church. Mr. and Mrs. Frank Bailey gave five lots at the corner of Tennessee and High streets for the building. It would be the first community building in the area. With a donation of $250 and a loan of $500 from the Methodist Mission Board and a construction contract for $2,265, they began. The University of Denver Chancellor formally opened the church on Sept. 3, and on Oct. 8, 1893, 15 members signed a charter. There was a depression in this area, but with sacrificial giving, they finished the interior of the church by 1895, and in 1900 they installed a furnace! In 1904, Rev. Paul Spenser became the minister, and he also ran a program at a Larimer Street mission. During his five years, this church helped to organize Warren Methodist Church. 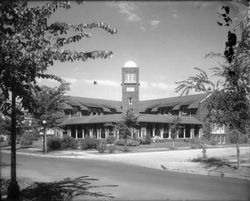 The church continued to grow, in spite of a typhoid fever epidemic. Popularly considered a community institution, the church was the only place in the area with facilities for community gatherings. By 1916 there were 343 members, doubled in the last five years, and they began to talk about a new building. Dr. Nuckolls was appointed minister, and they began with a $12,000 goal and ended with $70,000. The stewardship program started on Jan. 2, 1917. Three months later, WWI began. Still, people gave and John Evans gave the land (no relation to Dick). The last Sunday in the former Myrtle Hill Methodist Church, it was re-named Washington Park Community Methodist Church. During the building process, in 1918, the church bought a parsonage at 1312 S. Gaylord for $3,200, financed by a mortgage and $100 notes to various members. Before the building was finished, the Red Cross used two rooms to make surgical dressings.

A fragment from a bombed-out church in France was laid in the chancel floor here at WPUMC. The bell that was from the old Myrtle Hill church was hung in the tower. The first services were held on Dec. 29, 1918, three morning services, a communion service at 4 p.m. and an evening service. There were addresses by the Denver City Attorney, the Chief Justice of the Colorado Supreme Court, the Governor of Colorado and possibly the Chancellor of DU. 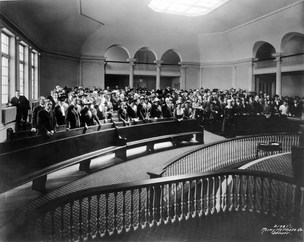 The church continued to be a place for the community, and among other things, housed a branch of the Denver Public Library until 1930. Because of the church’s support of DU, there was a scholarship for a person the church chose, which continued for 40 years. In 1924, two more lots were purchased. In 1925, the Steinway grand piano was purchased. There were 250 people going to Saturday night movies here, and they had 400 in Sunday worship. During the summer, the superintendent provided flowers for the church. Easter services were held at South High School. In 1926, over 1,100 were in Sunday school, and 56 joined on Palm Sunday. In 1943, there were 1,873. The church continued to grow, and in 1948 plans were begun for a new education wing. Construction was begun in 1950 and completed in April 1951. Now, 57 years later, it needs a new roof!

In 1931 the church helped to start Highlands and Grace Methodist churches as well as a Spanish mission. Later, the church underwrote the mortgage for Northglenn Methodist and Good Shepherd. In 1962, the church decided to have a goal – “the spending of as much for others as we spend for ourselves.” That year this church was the top 16th church of all Methodist churches in giving to others, including to the Blackfoot Indian Mission, Mexico, Peru, Argentina, Brazil, India, Africa, Pakistan, Hong Kong and Japan. 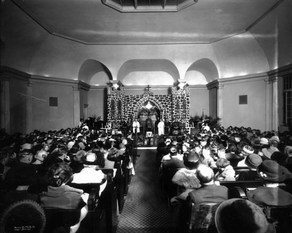